Cyntara v13
After a successful winter season and a surprise quarantine season in late March, the Cyntara Development Team is back at it again with an announcement that Cyntara v13 will be released June 26, 2020!
So, what has changed?

One of the most requested content changes that we have received over the past few years was for a rework of the end-game equipment. With the re-introduction of donor sets back in v12-s2 we knew that one or two types of equipment pieces above the strength of the donor set items would not be the end goal for equipment progression. Formerly, only the Starbringer/High Noble/Kyanite-tier and Battlemage/Amethyst/Kyanite-tier equipment were some of the few equipment pieces superior than what could be purchased in the Cyntara Store. This issue was further exacerbated by the fact that the method of obtaining these equipment pieces was not uniform among vocations. Not only that, but a number of these equipment pieces were unobtainable entirely.
No longer. We are excited to share that we have reworked endgame sets!

All pieces of the Starbringer, High Noble and Kyanite sets will be obtainable from the following bosses:
» Ferumbras
» Cosmic Reaver
» Namtar
» Orshabaal
» Gaz'haragoth
» Amirada
» World Ender

A Tier Set Upgrade Token can be obtained for completing the following activities (with a weekly cooldown on each):
» Killing the World Ender, Amirada, Namtar and Gaz'haragoth (each kill rewards a token).
» Completing 20x level 900+ tasks.
» Completing 15x level 25+ dungeons.
» Handing in 10x Demonic Crystals for Trimurti in the Demonborn Valley.

At the tail-end of Cyntara v12-s3 we released a special patch that was originally intended to be released with the start of v13. We wanted to perform a live test for the spawn changes in order to receive feedback prior to the start of Cyntara v13. For those that missed the patch notes, the general premise is that instead of "nerfing" a few problematic spawns, we decided to re-evaluate every single spawn and make adjustments. Primarily, hp/exp ratio was addressed as well as respawn rate and spawn density. These changes ended up being less of a definitive "balancing" but more about creating a solid foundation for balancing in the future.
For more information regarding these changes, check out the patch notes from the start of June. 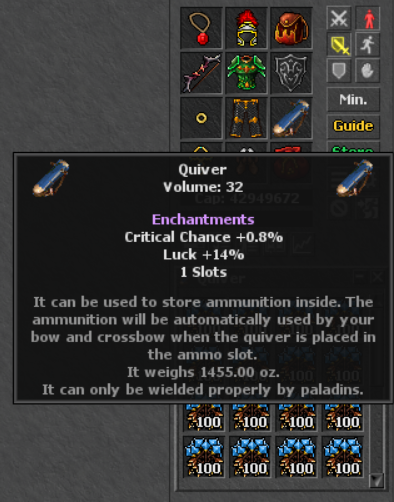 Cyntara will now have a new item type, quivers, that paladins will be able to equip in their ammo slot to store ammunition.
While it may seem like a weird feature since Cyntara has a built-in ammo refill feature, this will allow paladins have the same number of enchantment slots as other vocations while using ammunition that's not infinite (such as Crystal Arrow, Nightfall Arrow or Shatter Bolt).
Quivers come in 3 variants, a basic quiver (12 slots) that every paladin will start with, a regular quiver (32 slots) that players can purchase from the Tool Vendor for 1,000,000 gold and a large quiver (52 slots) that is available in the Cyntara Store.

Charms are trinket items that provide a method of gaining extra stats. However, over time, a number of powerful endgame charms and event-exclusive charms have been created that are quite powerful; the ability to stack these charms allows players to stack certain stats that are beyond what is reasonable. While there is nothing wrong with powerful endgame charms existing, we want to address this issue and promote more build diversity with charms. In Cyntara v13, players will now only be able to place one type of charm in their charm bag at a time. 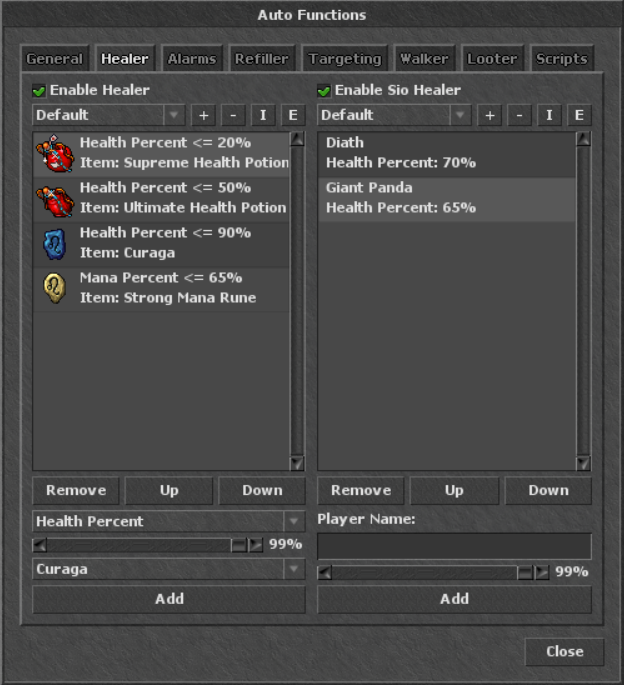 At Cyntara's inception, it had always been possible to use a bot to play Cyntara. At times, this was disallowed through the enforcement of Gamemasters; other times, it was openly allowed. Ever since Cyntara adopted its custom client, botting was once again disallowed and ultimately much more difficult due to bot adaptations. With this change, a plethora of Cyntarists had shown their disinterest in playing due to the lack of a bot. Initially, we wanted to evaluate the health of Cyntara without a bot; with a recent survey, we saw that the results pointed toward the outcome that a majority of Cyntara players would like to see a bot built-in to the client. Just as we had initially wanted to evaluate the health of Cyntara without a bot, we felt it worthwhile to evaluate the health of Cyntara with a bot. One major advantage of adding a bot to Cyntara is that the same software is available to all players, and that nobody is excluded from its access.

Cyntara v13 will serve as a trial run for the Cyntara Bot.
We will run a follow up survey before the next season to gather feedback from players on the newly-introduced bot once players get accustomed to them to decide whether the features should be kept, removed or adjusted.

Players will also receive an additional bonus to their experience and loot rate for every auto feature disabled, depending on the feature:
» Healer: +5%
» Sio Healer: +5%
» Targeting: +10%
» Walker: +20%
The Cyntara Bot can be found within the "Auto Features" part of the client. 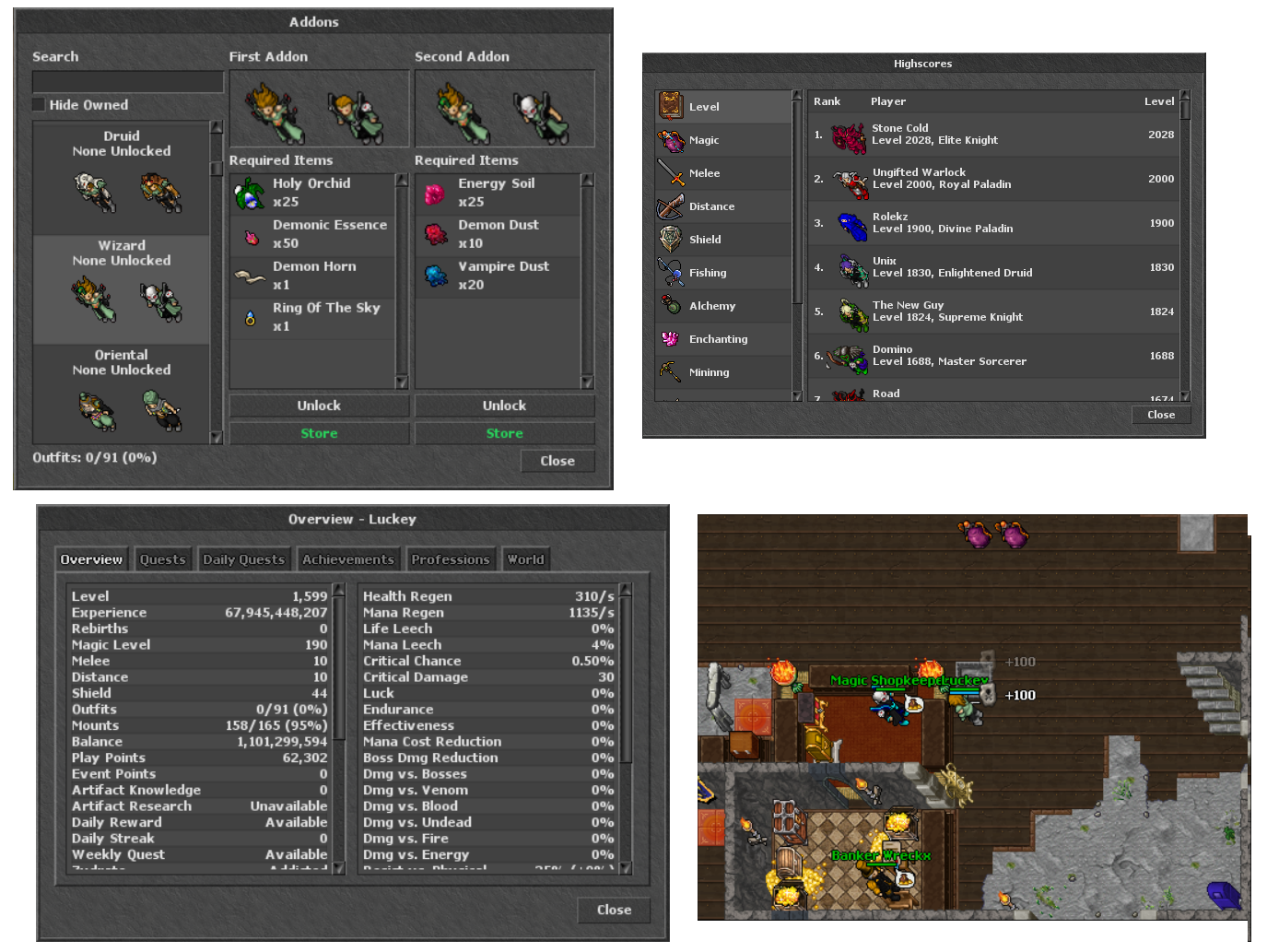 The Cyntara Client continues to receive improvements to its interface. Cyntara v13 brings a few notable UI improvements and features:
1. Improved Addon NPC UI - a much more clean look to managing the Addon Master NPC.
2. A built-in Highscores chart that can be accessed in-game.
3. Item Interaction Indicators will now "pop up" above player characters when players receive items (this applies to NPC shops, lottery, mining, alchemy, quests, fishing and a number of other features).
4. Perhaps a small quality of life feature more than anything, rows in menus are now more clearly defined by a slight shading difference for improved readability.

» The chat console will now display rebirths along with levels for player chat messages if the chat option is enabled.
» The Sell All option can now sell up to 65535 items at a time instead of hard capping at 100.
» Updated the Locate NPC feature.
» Fixed an issue where selecting non-discounted offers in the store would display wrong price in the top price label.
» Fixed an issue with a number of newlines in tooltips not working properly.
» The enter key in the main menu will now bring up the login form.
» The Cyntara store will now filter out owned cosmetic offers by default, they can still be gifted by unchecking the filter checkbox.
» Removed a default colliding keybind in Chat Off mode that would cause previously typed messages to be sent when toggling the chat with the Enter key. For existing players, this can be fixed by going to the Keybinds menu, selecting the Chat Off mode, focusing the Send Message entry and pressing the Clear Primary button.
» Hovering earned achievements in the Overview window will now show a tooltip describing how they were earned.
» Fixed a number of text input widgets being editable when they should be read-only.
» Improved item preview in the store window.
» Updated the auto mana burn function to cast Exevo Vita at 50% max mana instead of 80%.
» Added an option to disable outfit effects rendering to the graphics settings.
» Improved automated error reporting to better help us diagnose client issues.
» Fixed an issue with wrong task list widget background.
» Fixed an issue with Container IDs not working properly for last open containers restored on login.
» Fixed an issue with item tooltips throwing an error when hovering certain items used as UI widgets.
» Added dwarven, distance and melee rings to ammo refill.
» Auto private message autoreply feature.
» Auto eat food will now use items from inventory slots as well as containers.

» Fixed an issue where unpublished patch notes would show up in the website and client changelogs.
» Fixed sidebar markup.
» Fixed an issue with the forum boards not working properly with deleted posts under some circumstances.
» Player deaths on the player view page will now display a parcel icon for death entries that were a result of a push.

If this patch note seems smaller to you, it's because a large part of the development of Cyntara v13 was released during the lifespan of Cyntara's surprise quarantine season: Cyntara v12-s3. If you haven't visited Cyntara since Winter of 2019, take a moment to check out what you missed: