Cyntara v13-s2
The Cyntara Development Team is prepared to announce that Cyntara v13-s2, an update focused on quality-of-life changes, will be released December 18, 2020!
What’s in store this winter? 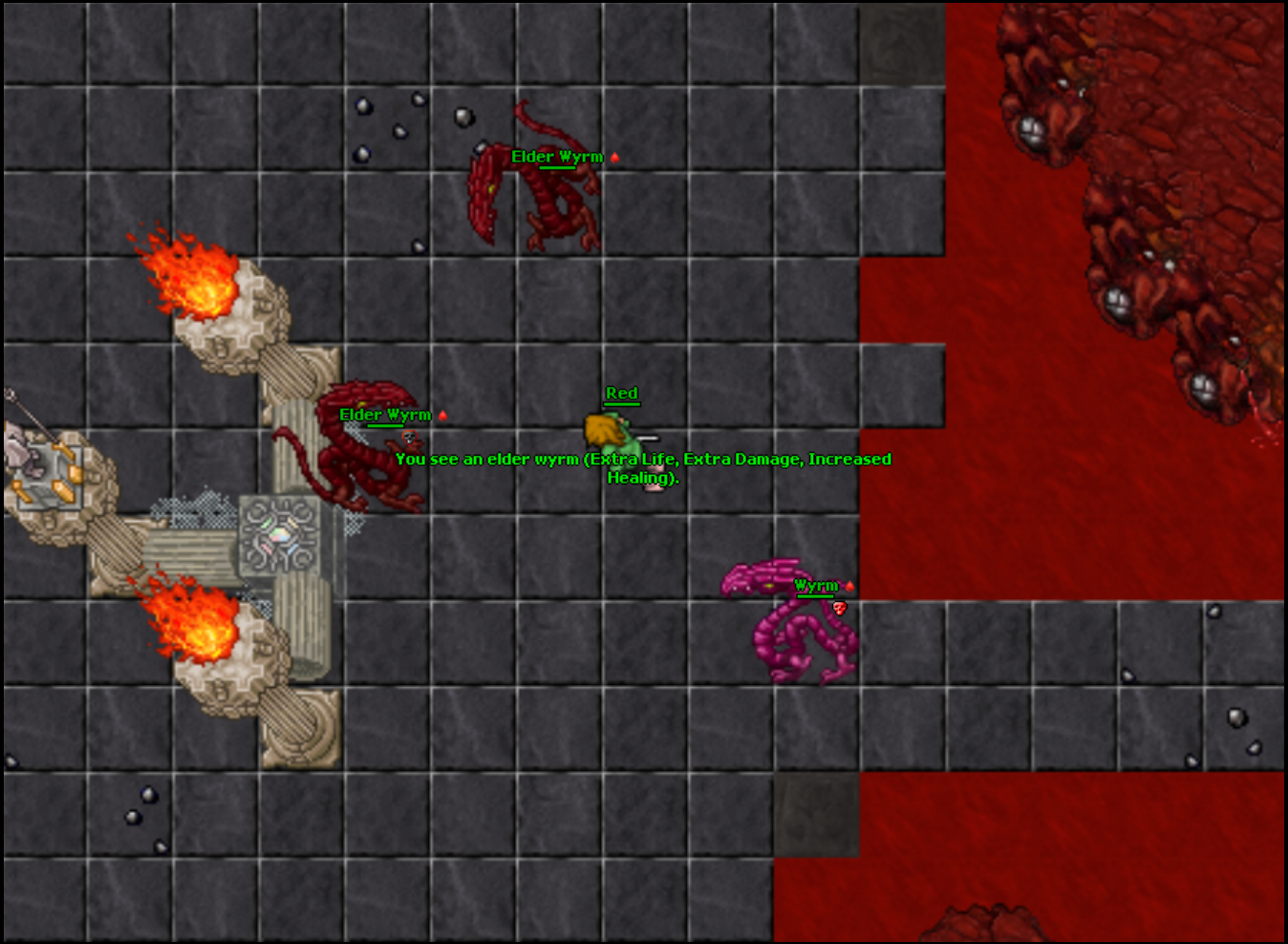 One of the many ways that we've looked to improve Cyntara's gameplay is to break up the monotony of hunting is to randomly adjust the stats of monsters encountered in spawns. Previously, the "badass monster" system was implemented to randomly spawn monsters with increased stats in certain spawns with increased rewards. The old system limited the monster pool to a small number of spawns and was underutilized. With Cyntara v13-s2, the "badass monster" system has been completely overhauled and replaced with Empowered & Infused Monsters. 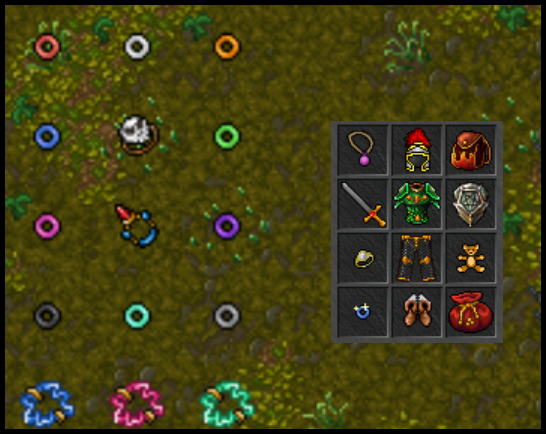 Traditionally, rings with limited duration (ie. Time Rings, Life Rings, Might Rings) have been unpopular with players because they take up a slot that's often filled by a more useful, permanent ring (ie. Imbued Rosea Ring, Star Ring, Ring of Ending). With Cyntara v13-s2 we wanted to address this issue by creating a secondary ring slot that only fits temporary rings.

With this change, we have repurposed all temporary rings to have more lucrative stats and given them their own slot so that they can be a part of every player's kit. These new rings can primarily be obtained through boss kills and Daily Quests. There are currently 15 Secondary Rings.

As Cyntara continues to evolve so does the way that we explore the way that players progress their characters. Our goal with these changes are to make the rebirth levels more valuable while not making them the final focus of character development. The following changes have been made:

» Max rebirth count decreased from 20 to 5.
» Adjusted experience rates past level 1400.
» Increased the extra hp/mana level bonus from 15 to 40.
» Increased the extra potion capacity bonus from 50 to 60.
» Removed the experience bonus players received for having not reached rebirth 5.
» Player’s Charm Bag will increase by 1 slot for each rebirth level to a max of 8 slots.
» Reworked Power Tabs

» Power Tabs will now display experience points rewarded.
» Removed the level cap for using Power Tabs as they were completely undesirable for high level players.
» Instead of not being able to use Power Tabs after a certain level, players within the top 25% experience will now gain experience toward their next level based on their exp percentile (ie. the top level will gain 1% of their level for being in the first percentile of exp) rather than a full level. 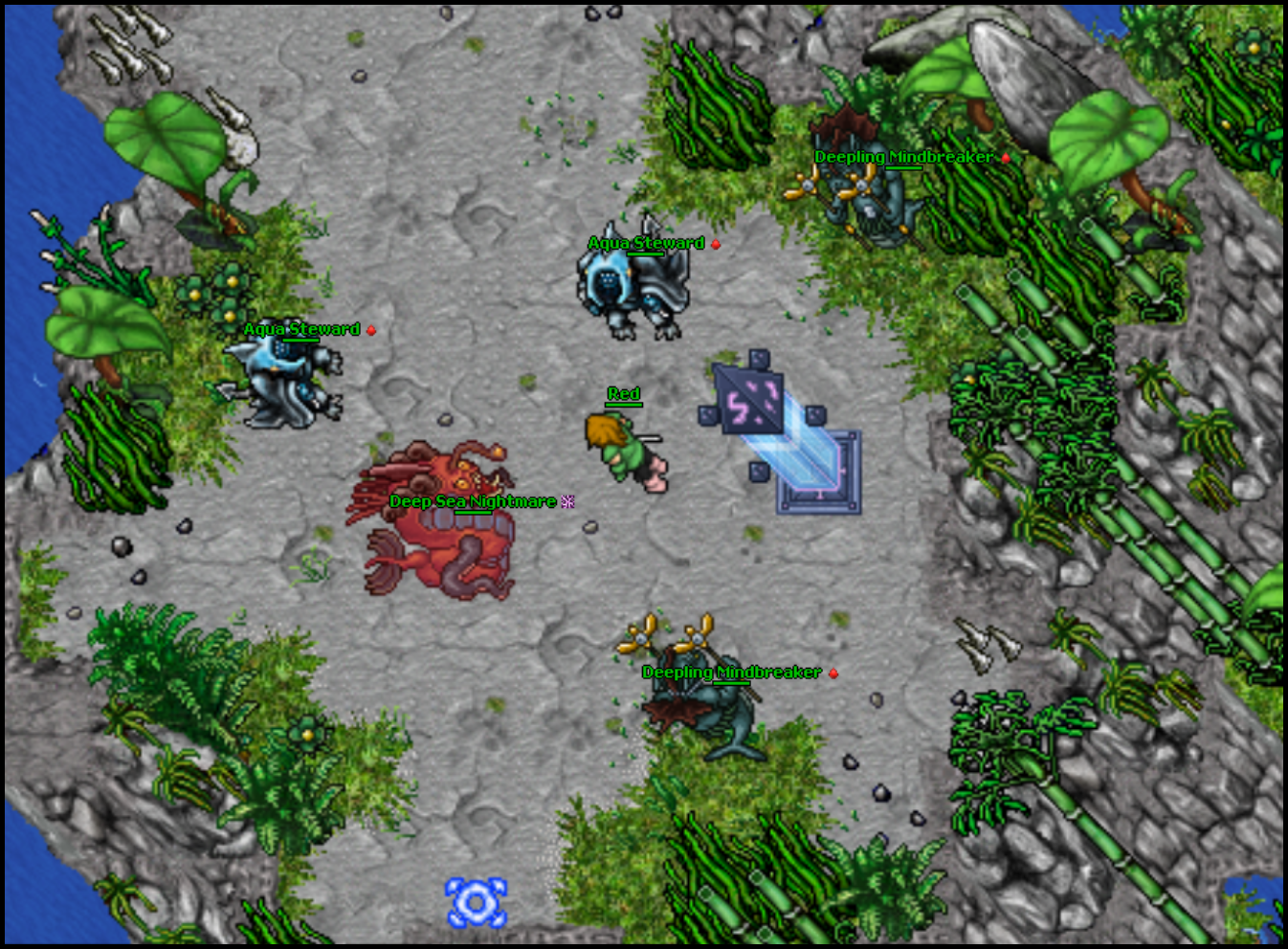 The Water Temple is a new, repeatable, endgame quest for players level 1200 rebirth 5. Players that complete the new endgame quest will have an opportunity to receive a perk from The Power Shrine in exchange for Power Tokens that can be looted from a number of rebirth spawns. This quest will be used to test the waters for content beyond the first rebirth.

This season proves no different in that we are continuing the development of the Cyntara Client and continuing to improve its interface. Noteworthy changes include: 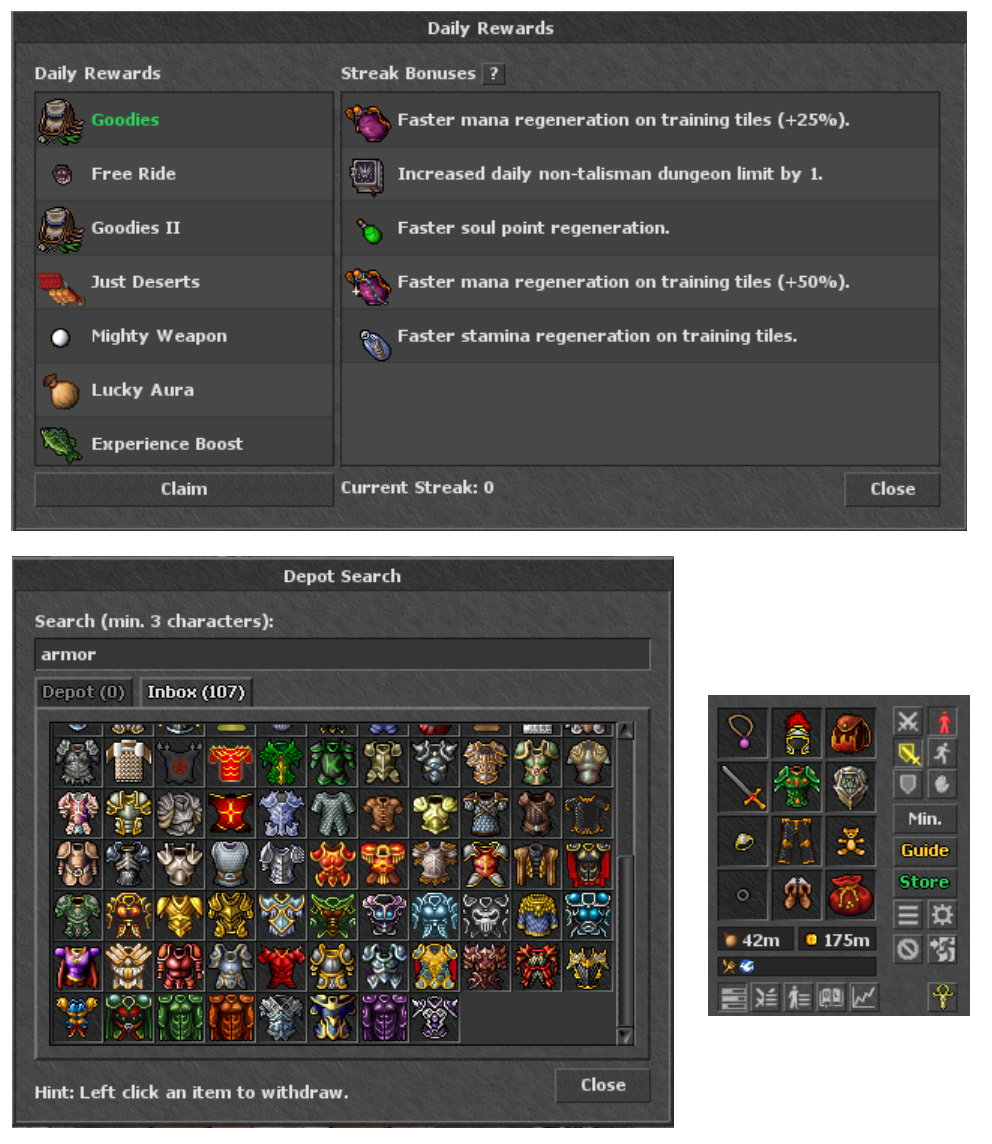 1. Added a UI for the Daily Reward NPC Elise.
2. Added a money count indicator to the inventory UI.
3. Added a Depot Search functionality. Items displayed in the search query can be withdrawn.

» Increased the item stack limit from 255 to 10,000; this means that players can have up to 10k items in a single stack.
» Fixed an issue with the magic level formula causing players to gain magic level too slowly
» Added the newest outfits and mounts.
» Added 3 new divination cards: The Alchemist, The Dwarf, and The Alchemist’s Stash as an alternate method to obtaining Alchemy recipes, ore, and Alchemy supplies respectively.
» Fixed an issue where enchantment names in player inspect view were not properly capitalized.
» Added a new store category which allows players to purchase and wear creature outfits with color palettes.
» Updated the outfit changer voodoo doll to include the newest outfit looktypes.
» Fixed an issue where “health regen” was listed twice under equipment stats where the second entry was actually “mana regen”.
» Improvements to “parcel” frags

» Fixed an issue where healing spells would not properly clear paralyze under specific conditions.
» Removed the exhaust from the bed in the “An Alternate Fate” quest.
» Added new “Decorations” category to the store

» Added The World Ender and The Shaper to the World Boss information in the World Overview window.
» Improved the experience and gold gain formula in Dungeons.
» Owned items that are stackable can now be deleted by discarding the item to the floor now instead of being stuck inside containers.
» Fixed an issue with HotA quest where Pharaohs would double-spawn and potentially stop respawning.
» Fixed an issue with item tooltip overview that would sometimes display incorrect stat names.
» The Addon Master NPC will no longer consider items in the player’s equipment slots toward items that can be turned in for addons.
» Fixed an issue where the Battle Pendant would set a cooldown to Paladins if they attempted to cast Swift Strike without having a target set.
» Fixed an issue where players could “double cast” spells, such as Blade Vortex, if the player died while the previous spell was still active.
» Removed the slight delay that sometimes presented when a monster was killed.
» Improved the visual effect of money earned when using the Sell-All Tool.
» Improved the graphics of the Lifeless Star Ring.
» Added the Invisibility spell to all vocations due to the removal of Stealth Rings.
» Adjusted quiver sizes to account for new stack limit total.

» Fixed an issue where the Armory was not updating properly and was missing a number of equipment pieces such as endgame equipment.
» Improved the Armory page style.

This patch note may seem smaller than average, and it's because a large part of the development of Cyntara v13-s2 was released during the lifespan of Cyntara v13-s1 - our longest lasting season in a long time. If you missed last season, take a moment to check out what you missed in our latest patch notes: