Cyntara v12-s2
The Cyntara Development Team is excited to announce that Cyntara v12-s2 will be released December 14, 2019.
This post showcases the highlights of the update. 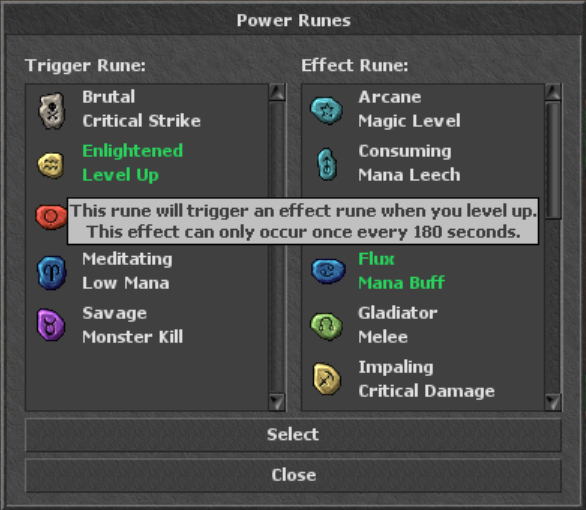 Power Runes allow players to assign Trigger and Effect runes to their equipped armor.
When the condition of a Trigger rune is met, the Effect rune will be activated and applied to the player.
Power Runes can be unlocked by killing raid bosses and completing higher level talisman dungeons.

Traditionally due to high rate nature of Cyntara the speed stats have been largely useless due to the fact that players reached speed cap relatively early.
In Cyntara v12-s2 we now have a completely reworked speed system: 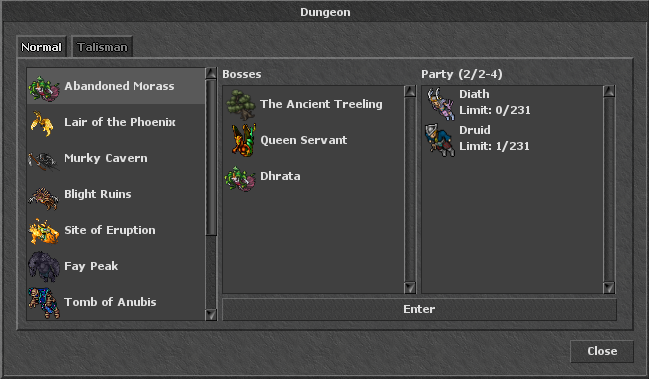 Cyntara v12-s2 will boast 4 new Dungeons: The Toxic Sewer, The Maze of the Minotaur, The Bandit Hideout, and The Haunted Den. This brings Cyntara's total Dungeon count to 14!

Additionally, due to popular demand, dungeons will now be accessible in solo mode however entering dungeons solo will require level 800 instead of level 400 and will have a slightly different scaling.
This ensures that we don't let newcomers try content that's unlikely to be balanced towards solo players while letting veteran players do it at their own risk. 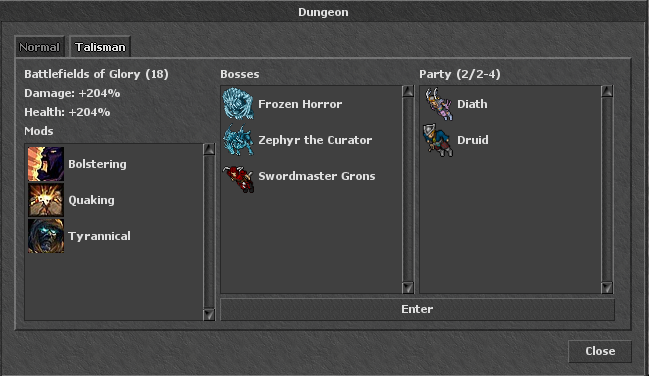 The dungeon system has received a new client interface making it easier to navigate through the available dungeons as well as clearly communicating the daily limits of your party.
The dungeon talismans now also have their own tab in the dungeon window displaying the health and damage scaling and active mods with their descriptions.

Each vocation has received two new Artifact Spells. Previous Tier 2 Artifact Spells have been moved from Artifact Level 15 down to Level 10, whereas the new spells will now require Level 15 as well as Rebirth 1.
Additionally, a spell progression system has been added where players can level up their Artifact Spells to further improve them for a total of 4 ranks.
The spells can be upgraded by killing certain creatures and using artifact spell tokens.
The new Artifact Spells are as follows:

Knight:
Brambles ("utamo mas tempo"): Reflects 50% of non-player melee damage dealt to the caster back to their attacker for 120 seconds.
Blade Vortex ("exori gran mas"): Summons a vortex of blades around the caster, dealing damage to all non-player creatures that are hit by the blade.

Details regarding the Artifact Spells and their progression tiers and benefits can be found in this forum post. 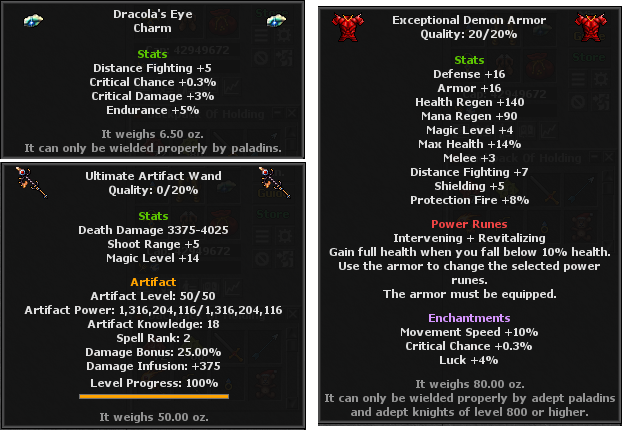 The client will now display tooltips for hovered items, this only applies to items in your inventory and backpacks.
Item tooltips allow to convey some information much easier when it's possible to make certain bits stand out as well as prevent the important parts of the game screen from being flooded with overlaid text.
Item tooltips are enabled by default however they are completely optional and can be disabled in the Interface options.
Additionally it is possible to configure item tooltips to only display when a modifier key is pressed (such as CTRL, Alt or Shift).

All monsters from the new rebirth spawns will grant Artifact Spell Experience with a chance to a drop minor artifact spell tokens on death that further reward extra experience.
Additionally all of the new rebirth spawns have a silent miniboss raids that grants a significant amount of Artifact Spell Experience with a chance to drop a major artifact spell token on death.
Primordial East and Primordial West spawns have been relocated from Level 1100 to Level 1000, Rebirth 2. 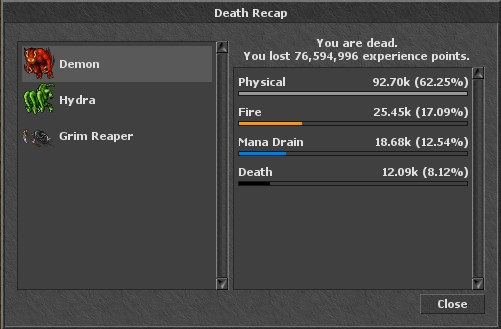 Cyntara will now feature a death recap system that will display damage type breakdown on death.
The death recap will always display the last 10 attackers and will contain all damage information between entering combat and death.
This should allow players to more accurately fine tune their gear and resistances against certain spawns and encounters. 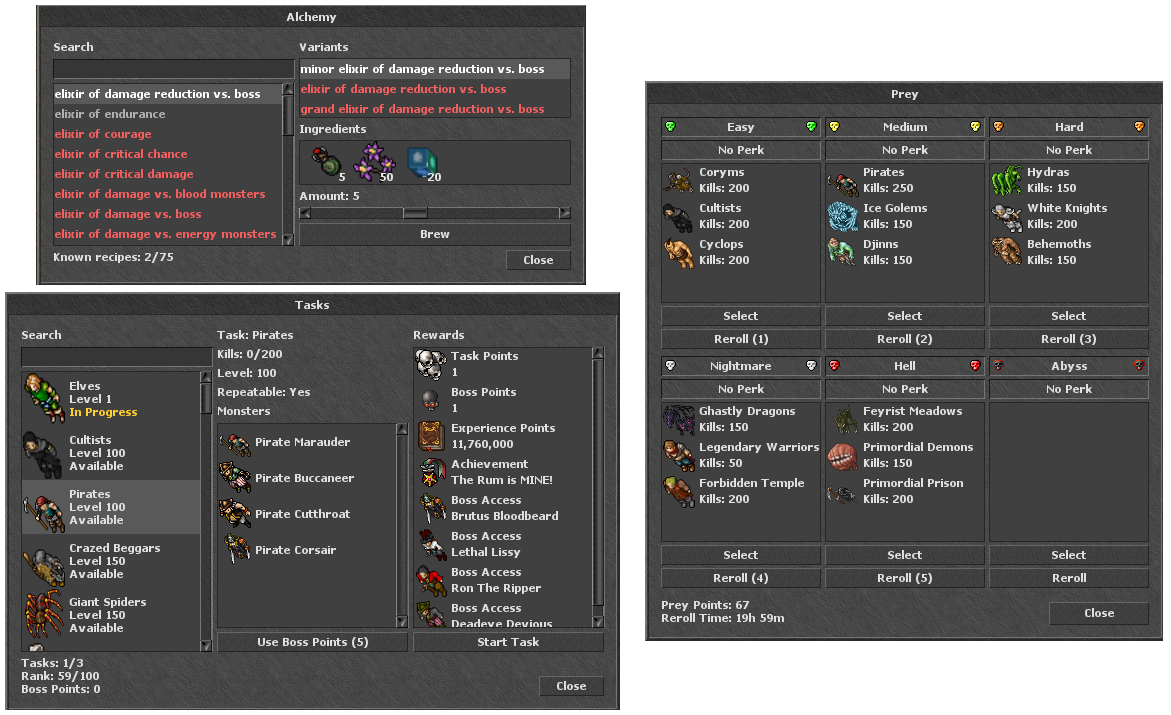 The Alchemy system has received a dedicated window that can be accessed from the top bar of the game client while inside any protection zone.
Upon speaking to the Task Master, players will now be greeted with a new Task Window as well.
The prey system has now also received its own interface in the client. Additionally a new prey tier, Hell, has been added to house rebirth prey tasks. 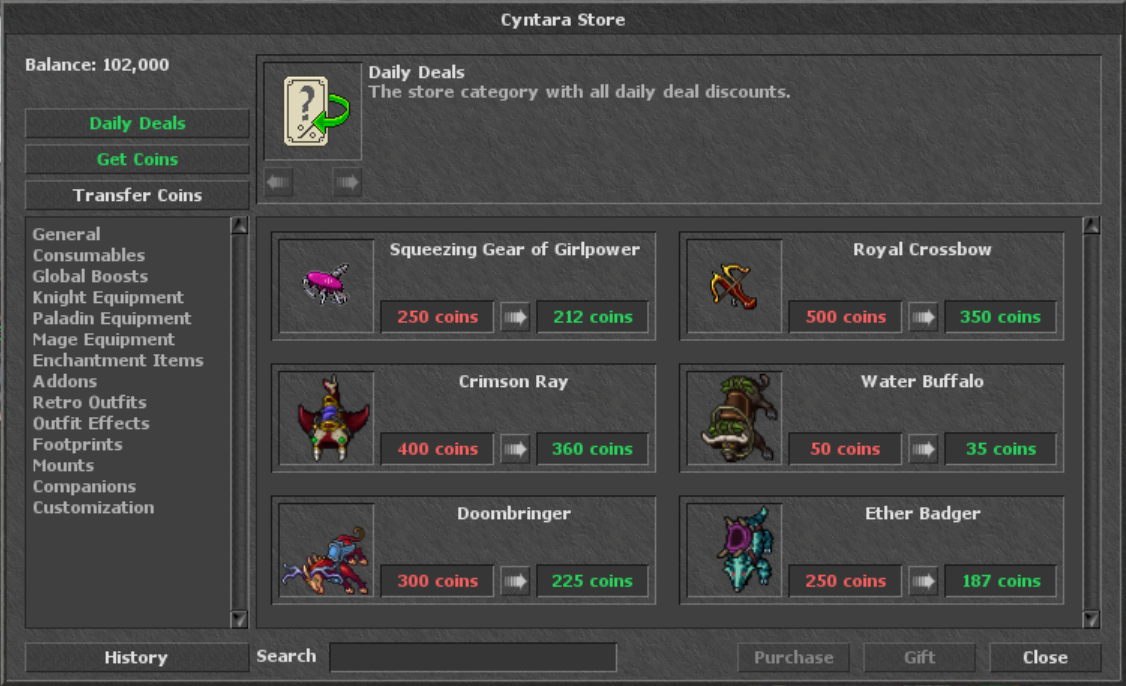 The store has received a brand new look to make it easier to navigate as well as a search functionality to quickly jump to the offers of interest.
Additionally the store will now have Daily Deals feature which will automatically apply 10-30% discounts to 6 random store offers every day.

» Revamped the temple layout to be more friendly to new players. Many important features and NPCs are now immediately accessible.
» Added a winter theme to the Cyntara City that will apply from December 1 through the last day in February.
» Adjusted the locations of the Pits of Inferno raid bosses.
» Fixed a few instances of monsters spawning with less or more health than their maximum health.
» Condensed World Chat, English Chat, Advertising and Help channels into a global Cyntara channel.
» Summons will now instantly teleport to their master on floor change.
» Updated the fishing system.
» Added a Christmas Event.
» Added new tasks.
» Fixed an issue where players could enter the Yielothax spawn when they finish the Otherworld quest below the Yielothax spawn entry level.
» Updated Kill Statistics with a number of missing monsters.
» Updated the weights of Artifact Weapons to be uniform to avoid a situation where players lose or gain capacity when switching between weapon variants.
» Adjusted Ice Miners and Arid Plateau spawns.

» The top panel has been reintroduced in hopes that the extra interface features will be more accessible to new players. The right side of the top panel will now also house notifications (such as boosted creatures etc), the new notification system also allows us to integrate them with more features in a generic way without obstructing the game screen.
» Added an option to filter out summons from the battle list.
» Updated the client logo and icon.
» Added rebirth count to Discord Rich Presence.
» Added "Sell All" option to the NPC Trade window. This option requires the CTRL button to be pressed as a confirmation to prevent accidental selling.
» Clicking the bless status icon will now automatically make the character say !bless.
» Fixed an issue with changing mounts not working properly when the mount preview was disabled.
» Fixed an issue with the Inspect feature displaying the internal critical strike chance instead of the effective value.
» Fixed an issue with inspecting fluid containers in the NPC trade window not working properly.
» Fixed a framebuffer error that some players were experiencing.
» Removed extra borders from minimap, health and inventory panels.
» Fixed a number of instances where right clicking or drag clicking lists wouldn't focus list elements properly.
» Fixed an issue with the actionbar not saving properly if the client was closed via the forced exit option.
» Fixed an issue with the red target square lingering on the old target when switching targets sometimes.
» Slightly improved the performance of the battle list.
» Added Raids tab to the Game Guides.
» Added Combat Log chat tab. This tab will now house the messages of type Damage Dealt, Damage Received, Healed, Experience, Damage Others, Healed Others and Experience Others instead of Server Log.
» Fixed a few typos.
» The amount slider in the NPC Trade window will now reset when switching between Buy and Sell modes.
» The NPC Trade window will now display the proper currency the vendor expects.
» Added drag item preview to the mouse cursor.
» Added a new built-in spellbok window with spell categories and descriptions.
» Fixed a few instances of windows not being properly focused when shown.
» It is now possible to "Use" NPCs to start interacting with them, for NPCs that only trade items the trade window will automatically show when interacted with.
» Fixed an issue with item stacking.

For those of you that haven't been around for too long in the last season, here is a list of past patches to get you up on speed with what changes have been made to Cyntara throughout the season.